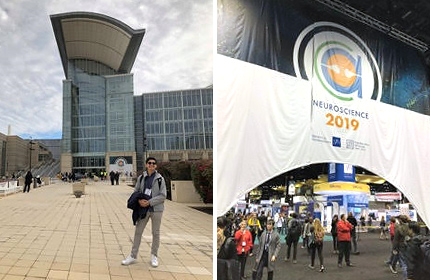 Pictures of the conference building and hall - McCormick Place, Chicago

Neuroscience 2019 is one of the biggest international conferences held annually for any field related to researching on the nervous system, including neurons, the brain and its products like behavior, emotion, cognition and society. It is organized by the Society for Neuroscience which has more than 37,000 members from more than 95 countries worldwide. The conference itself had more than 27,000 attendees and featured various topics and disciplines with talks given by world-leading experts in their field.

Before the actual conference, a short course on Neural Prosthetics and Brain-Machine Interfaces was held (Oct 18). It was a full day seminar and discussion on how the field was advancing and what else needed to be done.

On the first day of the conference, a lecture featured Dr. Fei-Fei Li from Stanford University who talked about artificial intelligence. Furthermore, a special lecture about RNA medicine for treatment of neurological disorders was held. The next days featured a talk on the clinical use of ketamine on depression, and also the gut microbiome - immune - brain connection. Then there was a talk on using brain organoids to model human disease. Next was a talk from Dr. Joseph Takahashi who discovered the mammalian circadian system. Then a lecture about using photonics to study neuroscience was also held. There were also various career development meetings and social gatherings that was organized by different groups. There were also different exhibits that featured numerous organizations, companies and universities.

Finally, on the last day of the conference, I presented my own research in the large exhibit hall. It was definitely an amazing and educational experience. I met different experts, and learned many valuable lessons. The conference was able to help me grow as a young budding neuroscientist.

The research I presented was entitled "Implantable microimaging CMOS sensor for deep brain gene expression analysis in freely behaving mice". Current brain imaging methods are either too difficult or expensive to implement for imaging gene expression in deep brain in vivo. We offer an alternative method through the use of our ultrasmall image sensor using CMOS technology.

Previously, we used such technology to image neural calcium activity through fluorescence (GFP). However, GFP requires an external excitation light which can cause autofluorescence and phototoxicity. Therefore, we want to use bioluminescence (luciferase) instead, because it is better suited for dynamic gene expression imaging. To do this, we had to develop a new and more sensitive device. We upgraded our three transistor active pixel sensor (APS) to a four transistor APS.

By doing so, we were able to come up with a device that exhibited higher sensitivity, lower dark current and temporal noise, and better signal-noise ratio. Furthermore, we tested the device on HEKT-293 cells expressing firefly luciferase driven by CMV promoter. Our results show that only our new device was able to detect this signal.

Therefore, our very small device will be a useful tool in studying the relationship between gene expression and brain activity. This study contributed to the growing field of neurophotonics, which uses light as a tool to study and manipulate neurons. The device shall help with the advance of neuroscience and knowledge in general.

From the beginning, the conference was already very educational. I learned from the actual experts themselves, and saw the newest findings in the field. I learned about topics like neural prosthetics and brain-machine interfaces, and was able to have small group discussions with the leading scientists in field. I was able to meet them in person, and exchanged conversation. It was also very fruitful getting to know topics outside of my area.

Furthermore, I was able to experience how a large scientific conference is held. I saw numerous people who were all working or interested in neuroscience. I was able to make conversation with plenty of them through attending social gatherings and networking opportunities. 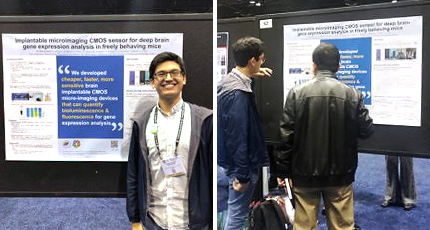 During my presentation, plenty of people became interested in collaborating with us. I was able to exchange contacts from people all over the world. Because of the conference, potential collaborators were established. Some wanted to use the device for their research, while others wanted to bring the device to a more wide reaching audience. Different questions, comments and points of improvement were made; therefore, this can help in improving the study.

It also allowed me to represent my school and Japan in an international conference. We were able to show that we are competitive enough to be part of such a prestigious event.

The conference endowed in me great knowledge about a multitude of topics in neuroscience and amazing experiences that shall develop my skills as a young neuroscientist.