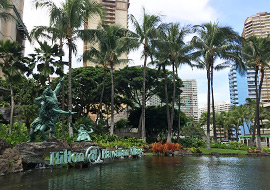 Hilton village (one of the meeting place)

The Electrochemical Society (ECS) is a professional association based in the United States. The 230th ECS meeting was held in Hawaii named “The 2016 PRiME meeting”. It is a forum for sharing the latest scientific and technical developments in electrochemistry and solid-state science and technology. Scientists, engineers and industry leaders come from around the world to attend the technical symposia, poster sessions, professional development workshops, networking opportunities and social events. The meeting was held right in the heart of downtown Honolulu, which is the perfect setting to really immerse oneself in all. 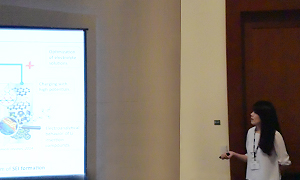 Attending this meeting is a precious experience to me. It made me to understand my merit and disadvantage. Besides, I learned a lot from the many presentations provided by the other experts in the field of Lithium ion battery. This is a very good chance for a student to join an international conference, communicate with other researchers and gain ideas through the plenty of lectures, presentations and posters. With these, I am truly grateful to Marubun Research Promotion Foundation for the travel support granted to me.