Silicon have been attracted as promising anode material because of its higher theoretical capacity than commercial graphite (silicon: 4200 mA h g-1, graphite: 372 mA h g-1). We have been reported the novel Si-O-C composite as anode for lithium secondary batteries with high discharge capacity around of 1045 mA h (g of Si)-1 at 2000th cycle and 842 mA h (g of Si)-1 with outstanding cycle ability over 7200 cycles. Nevertheless, it is not easy to increase the thickness of Si-O-C composite for higher areal capacity due to its weak adhesion strength between Si-O-C with current corrector. To solve this problem, we reported the nickel micro-nanocones hierarchical structured (MHS) substrate and carbon nanotubes (CNTs) covered Cu substrate, and Si-O-C was deposited on those of current collectors, resulting in improved areal capacity and deposited Si amounts, 600 mA h cm-1 with Si-O-C deposited on MHS substrate and enhanced deposited Si amounts up to 16.7 % by CNTs/Cu substrate.

In this research, the Si-O-C deposited on to CNTs/Cu substrate was used as anode for full-cell test with LiCoO2 (LCO) cathode. The loading amounts of LCO and Si-O-C were controlled to find optimum loading amounts for good-balanced LCO//Si-O-C full cell. Besides, to enhance the areal capacity, carbon paper (CP) which has three-dimensional structure was used as current collector. The Si-O-C/CP was prepared by electrodeposition with two kinds of electrolytes, in PC and EC/DEC bath. Material and electrochemical properties of Si-O-C/CP was measured by FE-SEM, raman spectrum, inductively coupled plasma, and charge/discharge test by half-cell. 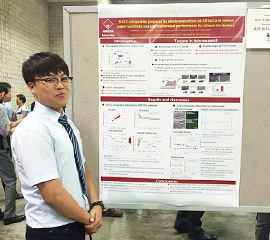 Poster presentation in PRIME 2016.
A lot of people came to see my poster and
asked to me many questions for 2 hours.

In this poster presentation, we introduced the Si-O-C composites as anode. In addition, two kind of substrate, 3D structured carbon paper and surface modified Cu substrate were employed to enhance deposited amounts of silicon and areal capacity.

After that, we also presented about material and electrochemical properties of Si-O-C composites deposited on 3D structured carbon paper. From this attempt, we could get the higher areal capacity because of its higher contact areal with electrolyte.
Many audiences asked procedure to synthesis the surface modified Cu substrate and specific contents about electrodeposition of Si-O-C composites.

I could meet a lot of people who are studying about lithium ion battery using silicon-based material as anode. Especially, Zao who is belong to University of California in USA wanted to know our previous report. So I let him know our previous papers which are published on web. In addition, I had discussion with Kim who come from South Korea, about silicon-based materials as anode. Because in Korea, a lot of research are attended used capsulation of silicon with carbon material to increase electric conductivity.